In light of most recent RIAA suicide attempt (which finally may be a successful one), I thought it would be a good opportunity to tell everyone about a great music site I discovered some time ago.

Amie Street is an online marketplace of independent artists. It works as a massive self guiding social network, with pricing which starts near zero, and then raises as popularity of a song increases. This way true quality music that everyone downloads raises in price, and becomes reasonable way to compensate the artist and support their further music endeavors. While new, undiscovered, or lower quality works, cost very little (few cents or so), and often stay that way. That’s not to say that there aren’t some gems in the few-cents-per-song crowd, there often is, in fact.

I have only had little time to dig around for gems there, but one example is Amanda Kaletsky, check out her Say You Believe song. Or, want more mainstream, try the world famous band Barenaked Ladies. One thing to watch out for is their built-in media player, it isn’t that good, I found interface unfriendly and confusing at times.

Of course, all Amie Street music is DRM free, as all music should be! Thus, between this and Amazon’s MP3 music store, which keeps adding major labels, there’s hope yet. So, lets work together to Free the Music, while we continue to pay for it, to the artist and not RIAA… 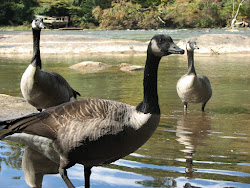