Before you scream – SPELL CHECK, STUPID – The error in the title is intentional. Nintendo’s device should be called iDS, but opting not to alienate Apple they called their “i” device Nintendo DSi.

With an upcoming launch (April 5, 2009) of actual Nintendo DSi device,

Apple wants to be sure we instead talk a lot about iPhone 3.0 operating system potential features. They are organizing “Preview” event on March 17, but no word yet on when the actual operating system will “hit the streets” as they say (or whether Apple, in a suicidal move, will decide to charge for this upgrade).

There has been a lot of speculation about what the new features should be in 3.0 (and you can try to weigh in). Personally, I hope they will finally address the biggest trouble with the iPhone – The Lack of Communication Features.

There, I said it – for a communications device, it is in BIG trouble with “missing the trend” of how young next generation communicates these days. We all heard enough complaints about MMS, but I really think that is Old-School already. Instead, next-gen use IM these days, and with it, the Video Chat! Seriously, no IM or Voice Chat on iPhone?!

Which brings me to last point of this post – Walled Gardens, again! Knowing Nintendo and Apple, they are likely to opt for “proprietary” software. End result? People on DSi can talk to friends on DSi only, and people on iPhones, with each other, only, etc. This is the ultimate insult, I think, yet one that is very hard to overcome. Not just because of “tradition” at the companies, but also because of the mess with Intellectual Property laws around software.

Maybe Nintendo and Apple can “sign an agreement to open networks”, etc, etc? This is just as bad, as offers no help for Android (G1, and later devices) nor people on Windows Mobile, Palm Pre, etc, etc…

We, The People, want Open Communications Standards! Skype could offer us some hope in the Video/IM arena, but it being owned by eBay and all, makes it unlikely…

Meanwhile, just pick up Xbox Live Vision cam, hook it up to your 360, which is already connected to your Big Screen TV. Now you are ready to experience the future of Video Chat, straight out of Back to the Future 2 movie. Of course walled garden applies, and is escalated by setup complexity (plenty of people with 360 who still can’t connect it to the Internet, even). 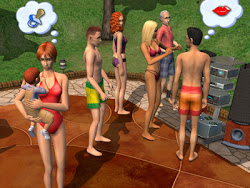